Welcome to the Rapt Interactive News blog! We just returned from PAX East 2018 which took place on April 5-8 at the Boston Convention and Exhibition Center in Boston, MA. We showed a playable demo of the game Placebo Effect and it was a great opportunity to get some real play-testing in with gamers. There were tens of thousands of people in attendance and we really had a blast meeting them and having them try out our game. 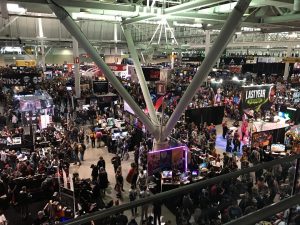 Our booth was set up in the Indy area with a lot of other very interesting, smaller companies. We had two demo computer stations set up to play the game, with a secondary large monitor duplicating one of the demo stations. In hindsight, we should have probably had at least three demo stations due to the fact many people were waiting to get a chance to play. 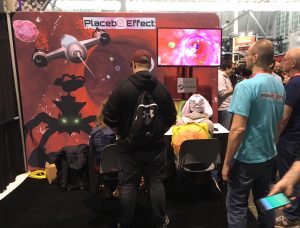 Our booth was pretty much packed all day with people playing through our entire demo level and even returning to the booth because the wait got a bit long at times. We must have had 400-500 people test out our pre-beta demo level over the four days of PAX. It was immensely helpful to have a bunch of people play our game so we could observe them and hear their thoughts on what was good and what needed work. The people that played the demo provided us with great suggestions and feedback on all aspects of the game which we are using to help us refine and polish. 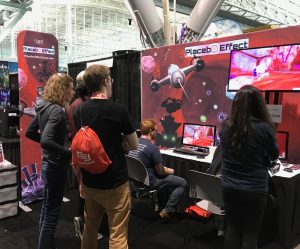 So, now we are home and back to bug fixing and level building. We are going to be incorporating a lot of everyone’s feedback into further iterations of the game so we can make this game achieve its full potential. We plan to release a Placebo Effect beta demo on Steam Early Access before the end of May 2018 so please sign up for that at PlaceboEffectGame.com. Thanks so much for your encouragement and support!